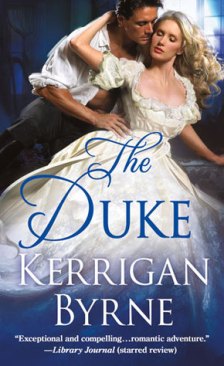 He is noble, notorious, and takes no prisoners…

Strong as a Viking. Handsome as Adonis. Rich as Midas. Collin “Cole” Talmage, Duke of Trewyth, is the stuff that legends are made of. He’s the English Empire’s golden son–until fate has its way with him. Cole’s family is killed and his closest comrade betrays him on the battlefield, leaving him gravely injured. But Cole is not one to dwell on misfortune. He is a man of duty, honor–and desire. And now he’s ready for the fight of his lifetime…

Imogen Pritchard is a beautiful lass who works in a hospital by day and as a serving maid at night. Years ago, when she was young and penniless, she ended up spending a scandalous night with Cole, whose tormented soul was matched only by his earth-shattering passion. Imogen entered a marriage of convenience―one that left her a wealthy widow―but she never forgot Cole. Now that her long-lost lover has turned up in her hospital, injured and with no memory of her, Imogen is torn: Is it a blessing or a curse that their past remains a secret to Cole, even as his new passion for her leaves him wanting to protect and possess her…at all costs, in The Duke, the next Victorian Rebels novel by Kerrigan Byrne.

As per the usual route, I liked this book, when will I ever not like historical romance and come on when I do dislike it then its pretty bad until you should steer clear from that book because let’s be honest I give a HUGE loophole with this specific genre that I am sure I am reading it with beer goggles.

Going into the review, I have to say I liked how Imogen had a past. It wasn’t a shady past but it was shady enough that should she be exposed her reputation would be ruined and she would lose everything she worked hard for.

I really liked the dynamic between the main leads. Their dynamic before he went off for some war mission and after he came back from being rescued. It was nice to see how before he went off to his mission he was the stereotypical male lead; charming, dashingly handsome, awesome in bed and a very considerate lover whereas when he came back he just wasn’t the same man and I loved how Imogen knows how he changed that he isn’t the same man he used to be and she was realistic about it. I mean, yeah she cared about him but she was also knew that if it didn’t happen then she will move on and live her life like what she has been doing all this time he wasn’t by her side.

I can’t really put into words why I liked that it was years before they actually met again and started a relationship but maybe one of the reasons is the one I just listed above where Imogen knew him before and after what happened to him and she chooses whether she wants to go down this path with a difficult man.

Now, I read on Goodreads that some readers didn’t like Cole because he was such a brute, inconsiderate, mean, petty, cruel etc but I liked him actually because the man was tortured. He was a prisoner of war and as far as I know prisoners of war don’t exactly get 5 star treatments in their cells especially if they also happen to be government spies. Cole was tortured for months and all he had to live for was the image/fantasy of Imogen and he was so desperate to go back home that when he was rescued; his rescuers couldn’t break the chain on one of his hands he decided to just fuck it and cut his own wrists. THE MAN CUT HIS OWN HAND OFF ALA 127 HOURS!!!!

If after going through all that the readers expect him to STILL BE CIVIL AND CHARMING all I can say is ARE YOU FUCKING INSANE?????

Obviously the man will suffer from PTSD. Heck, I almost chopped off my own finger with a machete 11 years ago and I’M STILL TRAUMATIZED let alone being tortured. I wished the author described in more details Cole’s PTSD but I guess how she described it in the book was okay to get by.

It was also pretty cool how the author inserted Cole’s situation of having no left (was it left?) hand and him having trouble with his prosthetic hand and all so it shows some form of realism there.

One thing I did not like about the plot was the antagonist. The antagonist was like a jack-in-a-box, they just popped outta nowhere and yeah I guess their reasons for being the antagonist was kind off credible, it would have been better had there been a backstory for their pain so the readers can truly empathize and relate to them because I for one was very confused by the appearance of said antagonist.

Overall, the book was a great read but I still prefer The Scot Beds His Wife because in this book it had some comedic aspects and the heroine is just bad ass. I mean Imogen is bad ass in her own way but I prefer my heroines to be gun-sword-dagger-dragonstone-wielding women.

Also, the part where Imogen kind of got hurt that Cole didn’t remember her when he first woke up and threw a teacup at her I was a bit miffed I mean I don’t even remember my nap if I wake up from a too long nap so give him some slack, the man just woke up from a coma.

*Book was provided by publishers in exchange for an honest review.

**I am not fan of the guys body on the cover. Too buff for my taste but whatever.